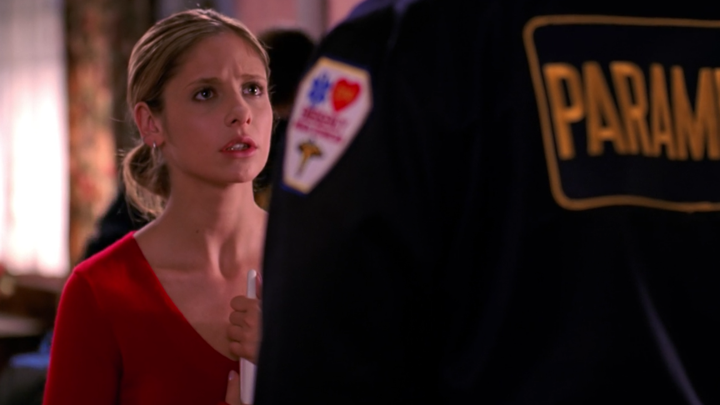 Based off of the 1992 film also titled ‘Buffy the vampire slayer’, the TV series followed the life of Buffy Summers – just a regular teenage girl trying to negotiate school, love and growing up in turn of the century America by day as she battled the forces of darkness by night. Running from 1997 to 2003 in the US across 7 seasons (not counting its Angel spin off or continued success in comics). The show amassed a large following at the time and even now has cult TV status.

One of the most revolutionary things Buffy did, though, was take teenagers—and their pain—seriously. The show’s central conceit of having Buffy (Sarah Michelle Gellar) be a “chosen one” destined to protect the earth from vampires and monsters offered a fairly typical setup for a supernatural drama, but the twist was that many of Buffy’s boogeymen were based on real sources of teenage angst.

Through out the show the introduction of new characters Anya (the ex vengeance demon) in season 3 and the addition of Buffy’s younger sister Dawn (who is treated as always being there by characters in the show, but is a new cast addition in season 5) has mixed things up. By season 5 things are changing, with characters ageing and Buffy moving from ‘teen heroine’ too full blown ‘world saving badass’, the seasons ‘big bad’s’ are getting bigger and badder.

But Season 5 adds things more terrifying than a new sister and an up-to-no-good Goddess; it had a stronger focus on changing personal dynamics and one of life’s biggest inevitabilities. Death. While as a show there is no shortage of death with characters meeting their end on a weekly basis, the death in episode 16 of season 5 is by far one of the most harrowing not only in Buffy or the Young Adult in general, but possibly in all of TV.

So, what makes this mid season episode so powerful that almost 20 years down the line, in a post Game of Thrones TV landscape, even when it is viewed alongside its contemporary counterparts? The answer is a combination of bold cinematic, editing and sound choices that work to enhance a deeply traumatic time for the lead character, allowing the audience to experience it as much as possible alongside the character.

The average mundane nature of death is so rarely explored in TV (especially TV with a fantasy edge). While all other characters in Buffy meet their end via demon or supernatural means (including Buffy herself in the climax of season 1 where she is momentarily killed by The Master – a ancient vampire) Joyce is killed by something very normal, a brain aneurysm. Compare this to most shows, where we regularly skip from finding someone dead to them being sanitised and prepped (often in a mortuary/hospital/funeral home) sometimes even skipping the whole ‘death and grief’ section and moving straight to a grave and funeral (where only the smallest tear must be seen rolling from a characters eye). This sanitised approach to death is all too common in film and TV, and this is what makes this episode so refreshing – by seeing the immediate aftermath we get all the emotions , ugly crying and all.

The relationship between Buffy and Joyce had been a rocky one, with years spent hiding her vampire hunting calling from her mother then Joyces struggle with not only the nature of what her daughter was doing, but the fact she has been doing it in secret for years. It felt like they had finally, after many years, come to an equilibrium and happy harmony with there relationship, this character growth makes the death its-self so much harder not only on the character but also us as an audience.

Its no secret that the dialog in Buffy was one of its strongest points, or that by season 4 Whedon had started to push the boundaries in other areas (including making the EMMY winning episode ‘Hush’ which had no dialog at all) and ‘The Body’ is no exception to this, where stylistic choices work to enhance the emotions in the audience. What makes it unusual is having the death of the character at the start of the episode rather than the end, this is often done to leave the audience hanging on till the next episode for resolution and to cut out the pesky waiting bits that instead this episode really focuses on.

This is a great 45 minutes of audio design for TV, much like in ‘Hush’ the sound design is used to help convey the emotions of characters where words are not enough. While in ‘Hush’ the reliance on orchestral sound scape replaces the dialog, ‘The Body’ does almost the mirror opposite. By removing all non diegetic audio leaves us with an airless and empty audio scape that reflects the real and raw emotion shown on screen. A real moment where the audio reflects the story is when we see Buffy open the door, briefly stepping outside. There are birds and distant cars and sounds of a school playground- she has no choice but to walk away from the children and her own adolescence, it is the end of her freedom. As an audience we are so used to getting ‘sad music’ when a sad thing happens it becomes quite disorientating when we don’t get these audio cues which again just reflects the feelings of the character.

Watching Buffy go from talking as an adult to her mother at the start (expecting a response) to the more teen ‘mom’ call (harking back to early Buffy episodes) to the shallow and scared ‘mommy’ as she sees her mothers very cold and lifeless body shows perfectly the loss of control she feels in the situation, how helpless and venerable she is against all the things that are about to happen to her. The episode continues to play with dialog as Buffy tells the 911 operator “She’s cold,” “The body is cold?” the woman asks. “My mom is cold,” Buffy replies keeping that very raw emotion and inability to process the events, this continues to play as Giles comes to help Buffy and attempt to revive Joyce, not knowing she has already been declared dead, Buffy shouts, “We’re not supposed to move the body!” before clamping a hand to her mouth in shock, horrified at the consequences of what she’s just said as if this now makes it real.

In great contrast to Buffy, Anyas speech is almost childlike (an inherent part of her personality and ex demon nature), she comically mimics others actions in the episode, struggling herself with how to deal and process death – something that is all to familiar for people who may have lost a parent or grandparent at a young age. This section is played out again without anything to enhance the moment, no music or score to push the viewers feelings. It also shows distance from the experience Buffy has had by returning the cinematic style to the more standard Buffy look, with steady cameras and mid shots.

The cinematography choices are bold just like the music, using handheld and more organic movements than we are used to in this show (which often uses a more static pan and tilt style) this once again shows to us the venerability of Buffy with long following handheld shots of her mostly in a mid shot, we are almost permanently looking at her face and the expression on it. In fact a lot of the key moments of the episode are shown from Buffy’s face rather than the action, when she realises her mother is dead, we get Buffy’s face not Joyce’s; when she is talking to the paramedics we are again focused on Buffy’s face and we don’t even see the face of the officer. This all adds together to make her feel more alone, giving it a greater feeling. This may all look pretty standard now we have much larger budgets, CGI, smaller cameras and digital recording methods; but 20 years ago this was a bold cinematic choice.

As the episode progresses we see Buffy have to tell more and more people she continues as if on autopilot. Until she has to tell her younger sister, it’s this moment that Buffy’s grief really shifts and her whole world officially changes as she stops being a sister and a daughter but a surrogate mother. Its the first time in the episode that we see Buffy from afar- showing her telling Dawn in isolation, the camera and the audience almost giving the sisters some intimate and private space.

Joyce Summers may not technically have a speaking role in “The Body,” but she haunts the episode—and, in many ways, the rest of the series—with her absence, the way most real-life mothers tend to hover over their children, even when they’re not around.

With the death of Joyce things are never the same again for Buffy, she is now an adult with all the responsibilities that come with that, the same is true for the show as well as the character as she struggles with taking on the role her mother had as well as trying to be her own person on her own journey.

It is the combination of all of the above that make this still a standout episode of TV, that makes it still resinate with audiences and hit nerves with viewers, making it still compelling and harrowing viewing almost 20 years later. We have had other hard hitting deaths but none that have hit quite the same cocktail of emotions, impressive dialog and character development that shape their lives for the reminder of the show.